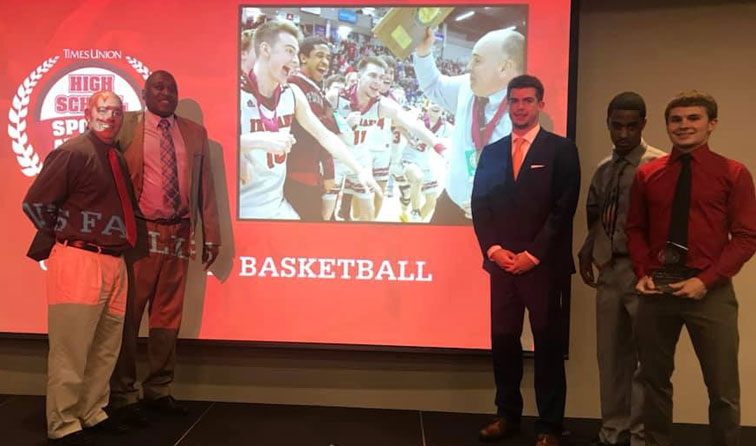 At last week’s awards ceremony, Tyrell took home the Fan Frenzy Award, and was nominated this way: “Tyrell is the heart and soul of so many Glens Falls sports teams. Despite his disability, Tyrell is an ever-present part of the school community. He’s the Indians’ varsity basketball team manager, helps during practice and is always cheering the team on from the sidelines. He stars on the Glens Falls modified hoops team himself.”

Joseph won Male Athlete of the Year for his incredible contributions to two sports: “As a football player, he started four years at safety and his final three years at quarterback, guiding Glens Falls to a trio of Section II Class B titles and a pair of state championships… In all, he produced an astounding state-record total of 4,763 points and culminated his hardwood exploits by leading Glens Falls to state and Federation Tournament Champions Class B titles as a senior.”

The Indians Boys Basketball team also won Male Team of the Year! “Suffice it to say the quintet of Joseph Girard III, Trent Girard, David Barclay, Kyle Vachon and Nick Danahy were bound and determined to not only achieve a first in winning a state basketball championship, they also wanted to make even more history by returning to Cool Insuring Arena in Glens Falls to lay claim to the Federation Tournament of Champions title as well.” Congratulations!!