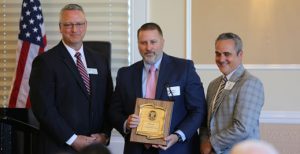 Congratulations to our very own Superintendent Paul Jenkins, who was named Volunteer of the Year at the Glens Falls Family YMCA annual meeting at the end of June!

In accepting the award, Mr. Jenkins said he was “honored and humbled to receive this award because being a volunteer for the YMCA, for me, really doesn’t seem like it’s a sacrifice of my time — it seems like it’s a responsibility. My family’s been involved with the YMCA since the early 90’s. Both my sons were involved in the summer camps, spent countless Saturdays in the soccer and basketball program, and our youngest son David went through the pre-school program.

“Being a volunteer at the Y just seems natural for me. I’m really honored to be part of the board, and part of an organization that does so much for the community. Obviously it would never be possible without Brian Bearor’s leadership, the hard work of his staff, and the support of all of you.”

Mr. Jenkins has served on the boards of the Section 2 High School Athletics board (as president), the Tri-County United Way, the Pupil Benefits organization, and the Glens Falls Family YMCA (as president). He was also instrumental in developing a thriving summer literacy program in cooperation with the YMCA, which is now in its sixth year. Congratulations!!