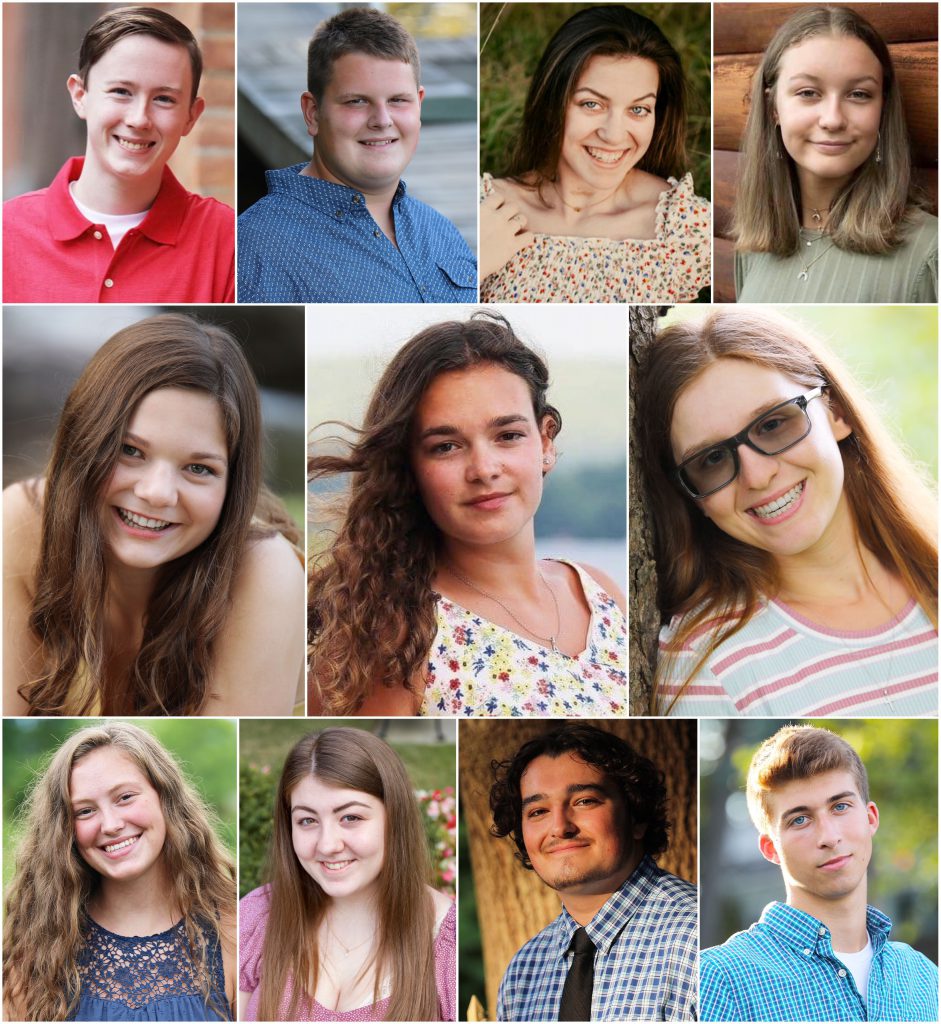 Cailin Harrington is this year’s Valedictorian. She is the daughter of Erin and Christopher Harrington of Glens Falls and has two younger siblings, Aidan and Cara. Cailin has balanced outstanding scholarship with many extracurriculars and leadership roles. She served as secretary of Key Club for three years and remains an executive board member. She is also the National Honor Society President and is involved in the International Club. Cailin has competed on the Varsity Swim Team for four years. She has also competed on the Mock Trial team, and was in the school productions of “You Can’t Beat the House” and “Sister Act.” She can be found playing the clarinet in the band or singing in Octet. During the summer, she teaches youth swim lessons at Gurney Lane Pool and around the neighborhood. Cailin is an AP Scholar with Honor and was awarded the Frederick Douglas and Susan B. Anthony Award from the University of Rochester her junior year. In the fall, she plans to attend Vassar College and study political science on the Pre-Law track.

Sydney Snyder is this year’s Salutatorian. She is the daughter of Julie Snyder and Stephen Snyder of Glens Falls. In her junior year she was inducted into the National Honor Society and was elected Vice President for her Senior year.  During her time at Glens Falls High School she has participated in and held leadership positions in many clubs including Key Club and International Club. She plays the violin in orchestra and in the select ensemble, Strolling Strings. Sydney has volunteered in many community events including, Camp Chingachgook spring and fall cleanups, International Activity nights at all of the elementary schools, and the St. Baldricks foundation. Sydney received the Post Star Teen Excellence award her senior year and is an AP Scholar. During her Junior and Senior years she worked at The Glen at Hiland Meadows Senior Living Facility. Going forward, she plans to attend Northeastern University, studying health sciences on a pre-med track.

Brianna Aiken is the daughter of Brian and Christine Aiken. She has been a very active member of both the school and community. She has achieved Honor Roll all four years of high school and was inducted into the National Honor Society as a junior. Her extracurricular activities include school as well as travel softball, the Key Club, and playing the trumpet in the Symphonic Band and Jazz Band. In the community, Brianna has enjoyed volunteering at the Special Olympics, the Festival of Trees, participating in local food drives, and feeding the hungry at local churches. She has also assisted with running the concession stand for multiple school sports events. Brianna plans to attend Siena College to pursue a degree in nursing and eventually become a psychiatric nurse practitioner.

Fisher Herrmann is the son of Chris and Bill Herrmann. He has been the captain of the Quiz Team and a member of the Math Team for three years. He played soccer, lacrosse, swimming, and tennis throughout his high school career. He plays trumpet in the Symphonic Band and Pep Band and electric bass in the Jazz Band. He was awarded the RPI medal and plans to attend the Rochester Institute of Technology to pursue a career in mechanical engineering.

Emily Lunt is the daughter of Todd and Jennifer Lunt. She has competed on the lacrosse and basketball teams, and has been captain of the soccer team for three consecutive years. She was chosen as an Honorable Mention Foothills All-Star for soccer and lacrosse. Emily was also a member of the Alpine Ski team and played second doubles in tennis this year when her typical sports were not offered. She has been involved in Quiz Team, International Club, and Pep Band and was inducted in the National Honor Society as a junior. She enjoyed volunteering at Camp Chingachgook each year, and for the St. Baldrick’s foundation. She also played first-chair trumpet in the Jazz and Symphonic Bands. Emily will be attending LaFayette College to study Civil Engineering.

Nicholas Teta is the son of Anthony Teta and Geri Lynn Cross of Glens Falls. He was a very active member of the school community, and was included in the National Honors Society both in 11th and 12th grade. He was a huge member of the music community, and participated in chorus, Octet, band, and jazz band all throughout high school. He was a member of the varsity swim team all four years as well, and worked at the Fort William Henry Museum in Lake George during the school year. He will be attending the University of Vermont and plans to study Biology with a pre med track.

Aidan LaFond is the son of Luke LaFond and Jennifer LaFond of Glens Falls.  He is the captain of the swim team and a member of the football team.  He is a member of the National Honor Society, competes for the Math Team, and volunteers with the International Club.  Aidan was selected for Boys State his junior year but could not attend due to the Covid-19 pandemic.  He was awarded the Computing Medal scholarship at the Rochester Institute of Technology, and plans to study computing security there in the fall.

Caroline Shaver is the daughter of Michael and Jennifer Shaver of Glens Falls. She has been active in both her school and community. Caroline was inducted into the National Honor Society in her junior year. She was a member of International Action Club, Mock Trial, Student Council, the Social Media Manager of Key Club, and the Varsity Swim Team. She also plays the saxophone in Symphonic and Jazz Band. Caroline has enjoyed volunteering at local events and helping her community. Caroline plans to attend the Music Industry program at SUNY Oneonta this fall.

Ella Kules is the daughter of Laura and Gene Kules of Lake Luzerne. She had been involved in a multitude of clubs and sport teams throughout her high school career. Ella has competed on the varsity volleyball team since eight grade, receiving both First and Second Team Foothill All-Star. She has also participated in the varsity track and field team as well as the varsity tennis team. Ella holds many club leadership roles, such as the volunteer coordinator of International Action Club, a member of Student Council’s decorating committee, and the community outreach director and student advisor of Key Club. She is also a member of National Honors Society, Big Brothers Big Sisters, Yearbook Club, the Strolling Strings Orchestra, and the Glens Falls Math Team. During the past four years Ella has contributed over 150 hours of volunteer work and has received the George Eastman Young Leadership Award, the Student Sage Scholar Award, and most recently, the Post Star’s Teen Excellence Award. She will attend Nazareth College in the fall, pursuing elementary education.

Catherine Hayes is the daughter of Tina and Patrick Hayes of Glens Falls. During her years at Glens Falls High School she has enjoyed participating in several clubs such as Drama Club, Quiz Team, and she was the secretary of Key Club. She also has been a member of the National Honors Society since Junior year. Some of her favorite classes were Precalculus, SUPA Academic Writing and AP US History. She spent lots of her time in the music department, being involved in Chorus, Octet, and playing the violin in Orchestra and Strolling Strings. Outside of school she enjoyed participating in dance and musical theatre. Next year she will be studying Music Education at Nazareth College. She would like to thank her friends, family, and teachers who helped her achieve so much during her high school career.

Dylan Anselment is the son of Jeff and Suzanne Anselment of Glens Falls. He has been a member of the Glens Falls Varsity swimming and lacrosse teams since sophomore year after transferring to Glens Falls his sophomore year.  Dylan was inducted into the National Honors Society his junior year and continued to be a member throughout his senior year.  He has been a member of Key Club since sophomore year and has been working as a lifeguard at the Great Escape during that same time. Dylan will be attending SUNY Cortland next year where he will be majoring in biology and minoring in chemistry while swimming for them.